MPR Tito is a rapper from East Atlanta signed to Hoodrich Pablo Juan’s Money Power Respect label. In a new interview with The Progress Report, MPR Tito speaks on his first day out of prison and spending his most recent birthday at the Rolling Loud Music Festival with Gucci Mane and Asian Doll. MPR Tito also speaks about his upcoming mixtape, Eat Ya Faxe and the success of his debut mixtape, Rixh Blxxd. 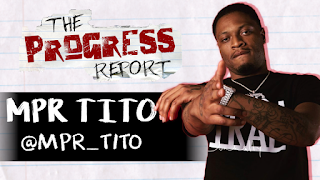